Succession planning isn’t easy. There’s a lot to know, a lot that can’t be fully anticipated. Demographics tell us that the biggest transition of business ownership ever is coming up. It’s the expectation of a majority of owners that a family member or employee will be the buyer. Because of relationships, emotion and the intimate knowledge of the business and the parties involved, an insider buying out the boss is in a different position than an outside buyer. Our goal with this book is to be the successor’s guide to succession planning. We want to help business buyers and business owners understand the nuances and dynamics of transferring a business successfully from the current owners to their internal successors.

By all appearances, the Howard family is what people think of when they think of a successful business. The family construction business is now into its fourth generation. The first generation started the business in 1920s. It was transitioned to their three children, who kept the business prosperous until the early 1990s. Then, like many typical family businesses, a number of children from the third generation worked in the business and went on to employ some of their children—the fourth generation. The business by now had two different operating divisions, one operated by one family and the other by the second. The third family wasn’t active in the business at all.

When the time came for the second generation to do their succession planning, they decided it was in the families’ collective best interest to keep both divisions together and operating as one company.  The third generation didn’t get alongwith each other all that well, however, and both sides were far more interested in what was best for their division, not the overall company.  The third family still had an equal stake in the compay, even though they were inactive. They were only interested in what they could take out of the business. The equal ownership and control limited what they could do in terms of growing the business, passing it on to the next generation, or cashing out from it.

Because of the governance structure, as time went by, one of the three third-generation Howards was always a pivot point to get whatever they wanted out of the mix with the other ones. They were also competitive with each other, so they put their individual operation ahead of the overall company. Over time, they failed to make investments in the business, and it began to decline.

Finally, one family member just wanted to get out. The mechanism the second generation had put in place to do that was perceived as being grossly unfair—it handcuffed the next generations so that they could never receive their value. That family member was only interested in getting money out, but the terms made it very unattractive. That only further prolonged the mess.

Our firm was engaged to try to find a way to break them up fairly. Initially, we wondered, “How can you fix this?” The smartest thing to do was to separate the companies, but by this point the families had reach a point of such deep-seated dislike that we couldn’t get them to come to an agreement. We were at the one-yard line more than once, and then one of the parties would change their minds or would get greedier.

After a lot of fruitless negotiation, the business is now shut down. The families have lost hundreds of thousands of dollars. In all likelihood, no one will get anything out of the whole transaction. This fourth-generation business will not make it to the fifth generation. The plan of the second generation was to create a lasting structure that would pass the business on and provide for everybody. It did the opposite. It’s tragic to see a very successful business, one worth perhaps five million dollars, go into receivership instead.

To find out what happened to the Howards, click the link below to purchase “Buying Out the Boss”.

Another side to the downfall was Alice’s assumptions. She thought that, as the owner, she had the power to decide the way it was going to be: “I’m going to sell to my team, they’re great, this is how I want it to be.” But she hadn’t done the work of having the conversations and understanding the nuances before making that assumption. She thought she knew her people better than she really did.

Assumptions about relationships can screw up a transaction. You might expect all your employees or family members to be on the same page regarding a certain issue. At the end of the day, though, you might discover they don’t agree at all, all because you forgot to ask them. With Alice’s team, we didn’t have that exploratory conversation. We came in to make the presentation, dressed in a suit and tie, and laid it out over a big dinner. There was never any earlier dialogue asking if they were even interested. We just took for granted that they were. That’s a dangerous assumption and a mistake we’ve learned not to make again.

Owners and entrepreneurs sometimes find it hard to understand that not everyone wants to be in their shoes. We look at things from the context of, “This is a great opportunity for you to own something, to have your shot.” Any owner can only see the positive aspects of the opportunity, but there are reasons people choose to be employed. Owners think that their succession plan is going to reward key employees who’ve been dedicated and loyal by giving them the business. They often have a lack of awareness as to what those employees truly want and what drives them.

In Alice’s case, she had given her team several indications that something was in the works. They’d all been concerned about her age and were wondering what would happen upon her retirement. She had reassured them on several occasions, telling them she was at work on a plan that “is going to be great for everybody.” Ultimately, in their view it was only great for one person…

To find out what happened in Alice’s case, click the link below to purchase “Buying Out the Boss”. 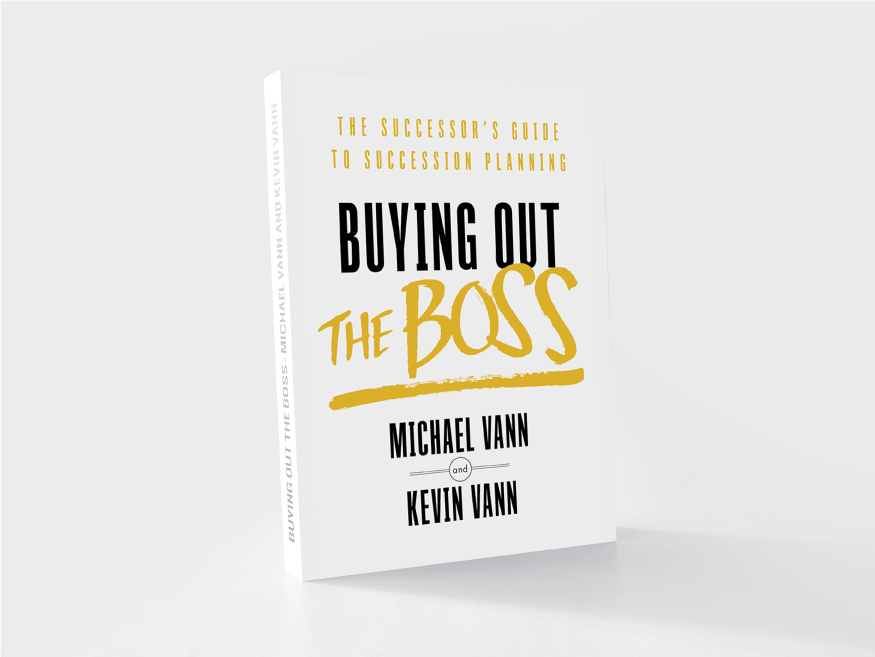 Kevin and Michael Vann offer insight into succession planning and the nuances and dynamics of transferring a business. People often assume that buying a business is easier when you know the owner—there’s a layer of trust and congeniality that doesn’t exist among strangers. But if you want to negotiate the best deal for yourself without wrecking relationships, you need to arm yourself with the right set of tools and tactics. You need a successor’s guide to succession planning.

In Buying Out the Boss, father-son team Kevin and Michael Vann reveal how you can handle common problems that arise during transactions between colleagues and family members. You’ll learn to:

Inside transactions can go off the rails when you don’t know what to expect. With Buying Out the Boss, you’ll understand the process and move through every step with confidence.

WHAT’S IN THE BOOK: The Successor’s Guide to Succession Planning

We want to help keep the business in the family, if that’s what they want. If not, we want to help employees or an outside buyer make the best deal possible to keep the company going. We want to help them buy out the boss. Plus, we like the challenge of putting together a good deal.

Chapter 2 The Elements – Four key elements of every transaction

Chapter 5 The Process –  Basics of expectations, valuation, and realities

Chapter 8 New Realities – Reconciling the realities: how to bridge the gap between what the seller needs and what the buyer wants

Chapter 9 Define Strategy – The strategy needed to reach an agreement

Chapter 10 Transaction Mechanics – The mechanics of the deal, including due diligence, payment structure, and tax and legal issues

Chapter 12 Get to Close – The many ways the deal could fall apart at the last minute, ways to avoid that outcome, and how to keep the deal moving forward We have an entrepreneurial family, going all the way back to the early 1800s. Our passion is for business; we own several today. When you grow up with a business background and go into consulting and transactions, you learn to solve a lot of problems and do crisis planning—and you learn to deal with conflict, privilege, and bias when creating the plans for the transfer of a business. We appreciate the intricacies of succession planning because we also own a company that had intergenerational family issues.  The business was started by two uncles who, at this point, haven’t spoken to each other in years. Seven cousins in our family had minority interests in this good-sized company. Five of them have left the business, leaving two to run it. Because of the family dysfunction, planning for the future is very difficult.

We’ve been consulting for clients for over thirty-five years, dealing with those same issues of succession, whether within the family, or as a non-family transfer. The Vann Group today brings our knowledge and experience to business transfers. Our goal with this book is to help business buyers and business owners understand the complexities of transferring a business successfully from the current owners to their successors, whether those successors are family members, insider employees, or outsiders. Our advice is based on our practical experience with hundreds of clients over the years.

We want to help keep the business in the family, if that’s what they want. If not, we want to help employees or an outside buyer make the best deal possible to keep the company going. We want to help them buy out the boss. Plus, we like the challenge of putting together a good deal.

Succession planning can be so complicated that, ideally, you would begin it from day one, when you start the business. Realistically, there’s a five-year window from the time you start to think that maybe it’s time to retire and pass the business on, to the time it actually happens. Before that, there should always be some planning done to protect your family and the business in the event the worst case happens. Most business owners leave succession planning for much later in the game, but it’s never too late to get started.

There’s a real need for our services today. Demographics tell us that the biggest transition of business ownership ever is coming up, but most of the businesses involved, which are a significant portion of individual wealth, aren’t positioned to be sold. In this book, we hope to provide the dose of reality that buyers need. Buying Out the Boss is the ultimate guide to succession planning. We want to help them understand the nuances and dynamics of what goes on in the emotional side of a business and how to apply that understanding to the purchase process. Sometimes we feel like family therapists, rather than business consultants, but our job is to be the business’s best friend and arrange the best deal for everyone.

Buying Out the Boss: Michael and Kevin Vann

Should You Buy The Company You Work For?

Listen to Our Podcast Episode on Author Hour

To discuss the future of your business, please contact us.